Australia said Thursday that its special forces were suspected of being responsible for 39 unlawful murders in Afghanistan when it released a long-awaited report of alleged war crimes in the South Asian nation.

Australia opened the investigation in 2016 amid reports from whistleblowers and local media about the alleged killings of unarmed men and children that the government was initially trying to suppress.

General Angus Campbell, Chief of Defense, said the investigation had found evidence that members of the Australian Special Forces had killed prisoners, farmers or other civilians and apologized unreservedly to the Afghan people for any wrongdoing.

The report “found that there was credible information supporting 23 incidents of alleged unlawful killings of 39 people by 25 Australian special forces, predominantly of the Special Air Service Regiment,” Campbell told reporters.

Some of those allegedly responsible are still serving in the military while others have left the armed forces. The investigation recommended that the 23 incidents, which involved 19 people, be referred to the police for a criminal investigation.

In a letter accompanying the investigation report, James Gaynor, the Australian Defense Forces inspector general, described the nature and extent of the alleged wrongdoing as “very confrontational” and noted that there were additional allegations that members of the Australian military had treated people under their control with cruelty.

“None of these alleged crimes were committed during the heat of the battle,” he wrote. “The alleged victims were non-combatants or no longer combatants.”

In the course of the investigation, New South Wales Supreme Court Justice Paul Brereton and his team questioned 423 witnesses – some multiple times – and reviewed more than 20,000 documents and 25,000 pictures.

The team “faced tremendous challenges in obtaining truthful disclosures among the closed, tight-knit, and highly divided Special Forces community,” the report said, which explained the length of the investigation.

Much of the 531-page report was edited because of classified safety information or because it contained material that could jeopardize future criminal proceedings.

It also found that some victims had guns used, while junior soldiers were sometimes forced to shoot prisoners for a “first murder” through an initiation known as “bleeding”.

Large parts of the more than 500-page report have been extensively edited [Lukas Coch/AAP Image via Reuters]The report said that there was likely to be a failure to uncover all the violations committed during the years of investigation and recommended that a mechanism be put in place to receive and assess future allegations of war crimes in Afghanistan.

“We began this investigation in the hopes that we could report that the war crimes rumors were without substance,” the report said, finding that all but two of the team were serving in the Defense Forces. “Neither of us wanted the outcome we came to. We are all diminished by it. “

A special investigator appointed last week will now determine if there is enough evidence to move the prosecution forward.

Al Jazeera’s Nicola Gage, reporting from Canberra, said the Australian Defense Force is expected to set up a fund to compensate the victims’ families. 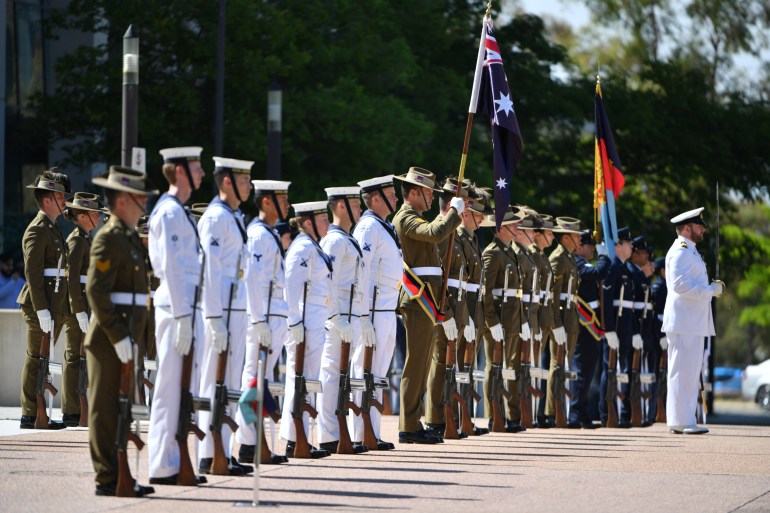 An honor guard at Defense Headquarters ahead of the publication of the investigation into alleged war crimes committed by Australian soldiers in Afghanistan [Mick Tsikas AAP Image via Reuters]The Australian military, along with US forces and other allies, was deployed in Afghanistan after the September 11, 2001 attacks.

Over the past few years, a number of often harrowing reports have surfaced of the behavior of its elite special forces – from a prisoner shot to save space in a helicopter to the killing of a six-year-old child in a house robbery.

The US is also under investigation for possible war crimes in Afghanistan after the International Criminal Court (ICC) cleared an investigation earlier this year. The court will also investigate allegations against Afghan soldiers and armed Taliban fighters.