Ibadan, Oyo State, Nigeria – During the annual festival in celebration of Yemoja, the goddess of the river, the day begins with music, dancing and prayers. There are 400 gods – called òrìsà in the Yoruba language – each representing a force of nature. Yemoja is considered the mother of all, that’s how important water is for life.

Yemoja devotees dance in front of the temple in Popo Ibode Yemoja, Ibadan [Femi Amogunla/Al Jazeera]Nowadays, most Nigerians belong to one of the two main religions, Christianity and Islam, while traditional religions, which were much derided during the colonial era, have fallen by the wayside in many places.

But in Ibadan, where belief in all Orisa – the Yoruba gods – remains joyful and strong, the celebrations of the ancient religion continue. The 17-day Yemoja festival in October is as old as the Yoruba. According to the priestess Ifawemimo Omitonade, it has been celebrated since time immemorial.

October 31st is the grand finale of the Yemoja Festival in Ibadan, when various groups of Orisa devotees dance to the rhythm of the drums in front of the Yemoja Temple.

Inside is Ogunleki, a 400 year old statue of Yemoja, a woman breastfeeding a baby, about 1 meter high. Young and old devotees sing Yoruba songs and thank the òrìsà for keeping them healthy since the previous year and allowing them to see another festival. 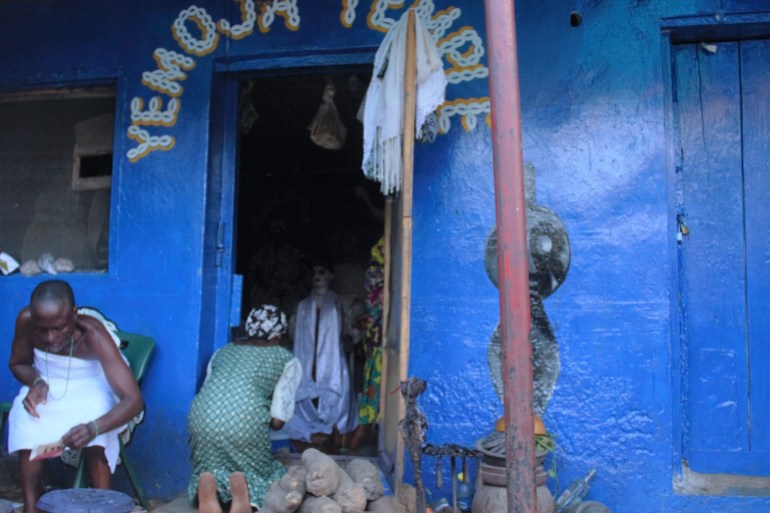 A Yemoja worshiper kneels in front of Ogunleki, an artistic rendering of Yemoja that is more than 400 years old [Femi Amogunla/Al Jazeera]They also sing prayer songs, confident that they will return more prosperous in the next year, and later they will go to the river to make their offerings and more prayers.

Chef Akinola Olaosun – “The river is inhabited by ghosts”

In the temple, Chief Akinola Olaosun prepares the items to be presented to Yemoja by the river. Chef Akinola is also known as “Aare Adimula Fun Odo Babalawo Ilu Ibadan”, which translates as “President of the Young Herbalists of Ibadan”. 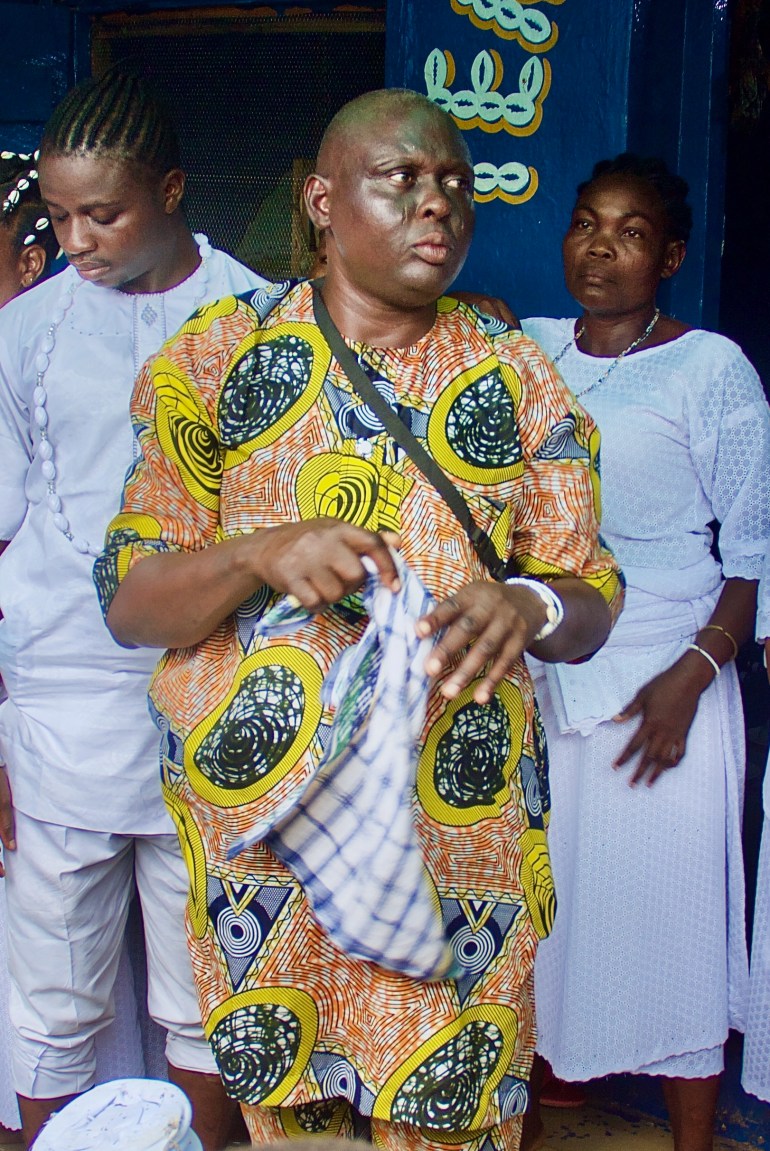 Chef Akinola Olaosun while preparing yemojas food in the temple [Femi Amogunla/Al Jazeera]In front of him, next to the statue of Ogunleki, is a row of calabashes – large, melon-like fruits that have been hollowed out – into which he drops sacred objects as offerings to the goddess. Among them are dried kola nuts in which people prayed to Yemoja.

After these preparations in the temple are completed, the chief Egbelade Omikunmi, the Baale Yemoja – the main priest of Yemoja – says prayers. His hands are outstretched to the devotees who respond with “Ase”, with the Yoruba ending with a prayer. Then the procession to the river begins. 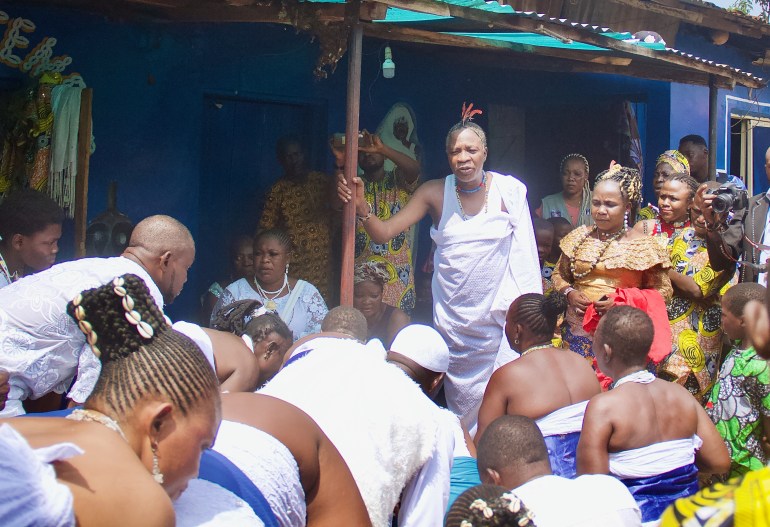 Baale Yemoja from the country of Ibadan prays for the celebrants in front of Yemoja’s temple [Femi Amogunla/Al Jazeera]Accompanied by music, women dressed in white carry calabashes on their heads. In each calabash there are different products – corn and beans cooked together, yam pulp and fruit – that are prepared for the òrìsà. The participants follow the procession of Arugba – the calabash bearers. Your destination: the nearby river. Their purpose: reconciliation and prayers to Yemoja. 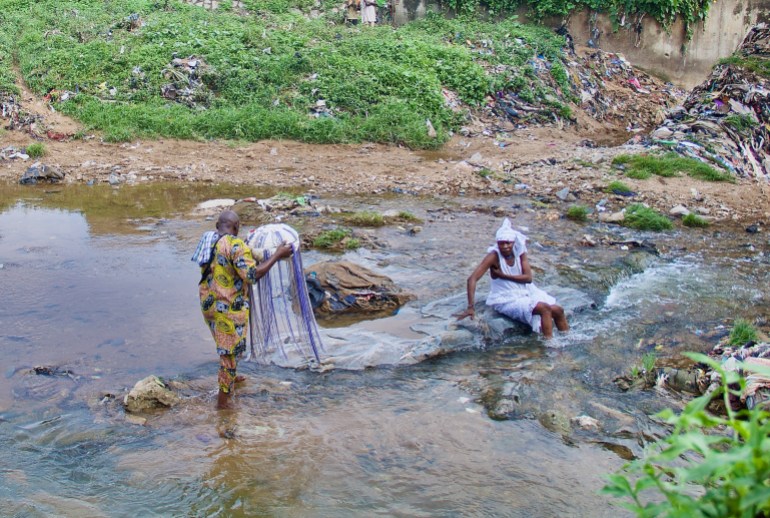 Chef Akinola Olaosun brings one of the calabashes with food to Baale Yemoja for reconciliation [Femi Amogunla/Al Jazeera]”The river is inhabited by ghosts that we talk to,” says Chief Akinola. “We also commit to them annually. During the festival we keep our promises by giving them what they are entitled to. “In this way, he explains, the devotees say thank you for the past year and pray for a better year. 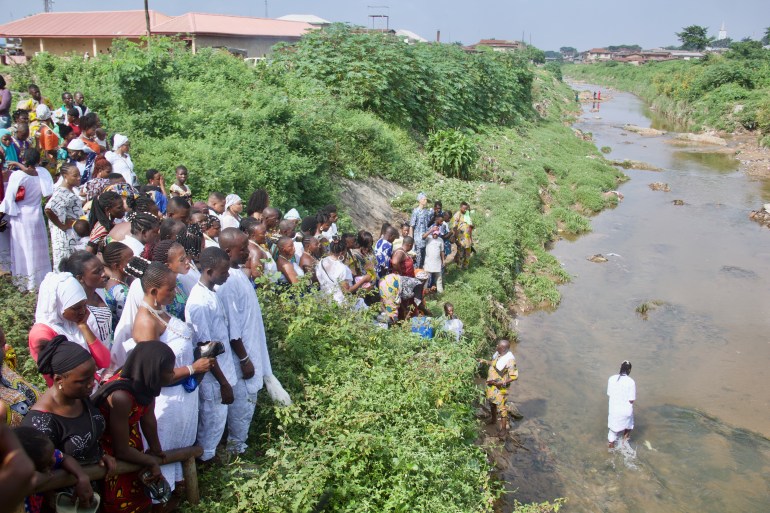 Some of the participants and devotees offer prayers for the deity as the reconciliation continues in the river [Femi Amogunla/Al Jazeera]Due to initial fears about the spread of COVID-19 and this year’s riot over police brutality in Nigeria, the crowd at the festival is more modest than it might have been, but more than 300 turned up.

“It is good to know that people have actually come and have shown their trust in our mother,” says Ifawemimo Omitonade, the priestess of Yemoja. As for the high priest, the priestess is chosen by worshipers who have “consulted” with Orisa Yemoji through divination and prayer. Once selected for that rank, a person goes through a nine-day initiation process of rigorous self-examination to bring them closer to their chosen Orisa, known as ita. Once elected, a priest or priestess retains his or her title for life. 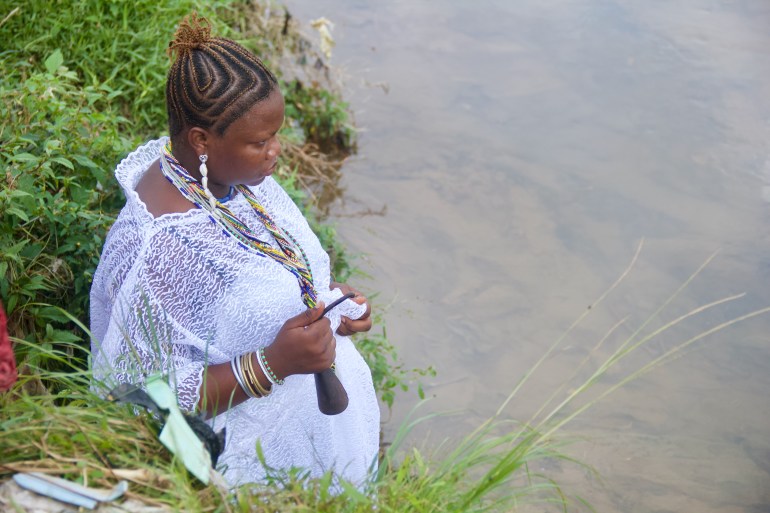 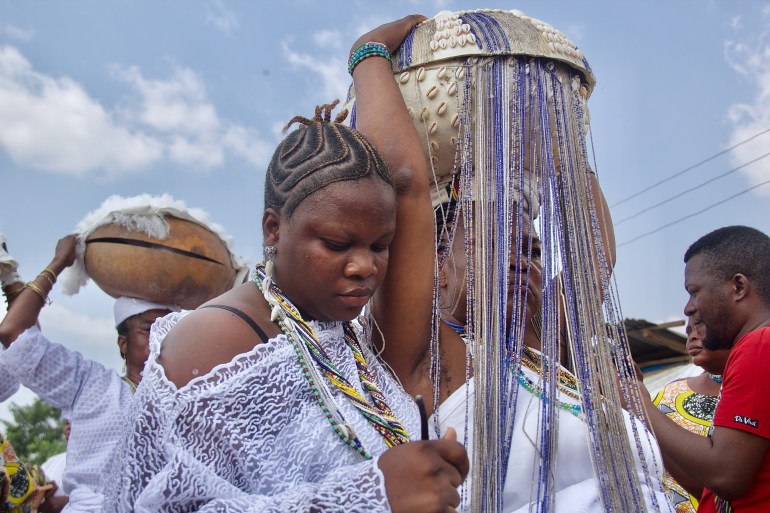 Iyalorisa Omitonade leads one of the calabash carriers to the river during a procession [Femi Amogunla/Al Jazeera]Ifawemimo, in her 30s, is one of those supporters who work to keep the old traditions alive in this part of Nigeria. She shares the beauty of traditional religion on social media. 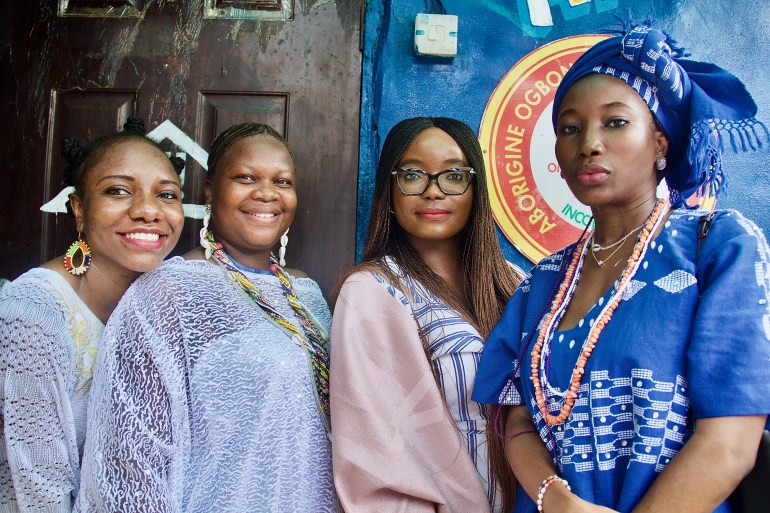 Friends of the Yemoja priestess who came to the river with her pose for a picture just before the procession to celebrate [Femi Amogunla/Al Jazeera]”People always think that traditionalists are fetishists … and other kinds of negativity,” she complains. However, she is happy that young people are developing an interest in traditional religions and demystifying them.

When the prayers by the river are over at the end of the celebration, Ifawemimo takes some of the water from the river into a bucket and sprinkles it on their followers. In addition to being sprayed, some of the trailers collect some of the river water in bottles. This sacred water is considered medicinal – mixed with the water that people drink or add to a bath to cure diseases. 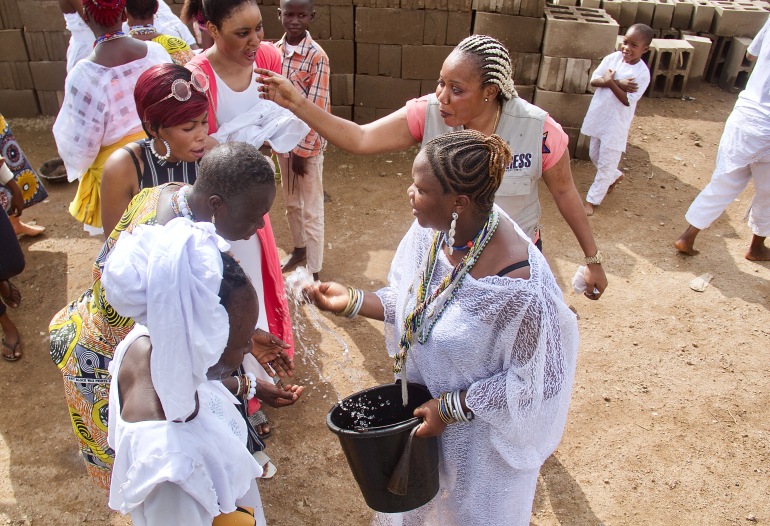 Omintonade sprinkles some of the participants with water from the river after the reconciliation. “This is a form of rejuvenation and blessing from the Orisha,” she says [Femi Amogunla/Al Jazeera]“The water is used to rejuvenate and bless Yemoja,” explains Ifawemimo.

Yoruba culture lover Foluke Akinyemi, who hosts the local Yoruba radio talk show Awa Ewe (“We, the Youth”), has come to this year’s festival. She was invited by Omitonade, whom she met through social media. She is a Christian and says the festival is an opportunity to reconnect with her Yoruba roots by worshiping the deities her ancestors prayed to. 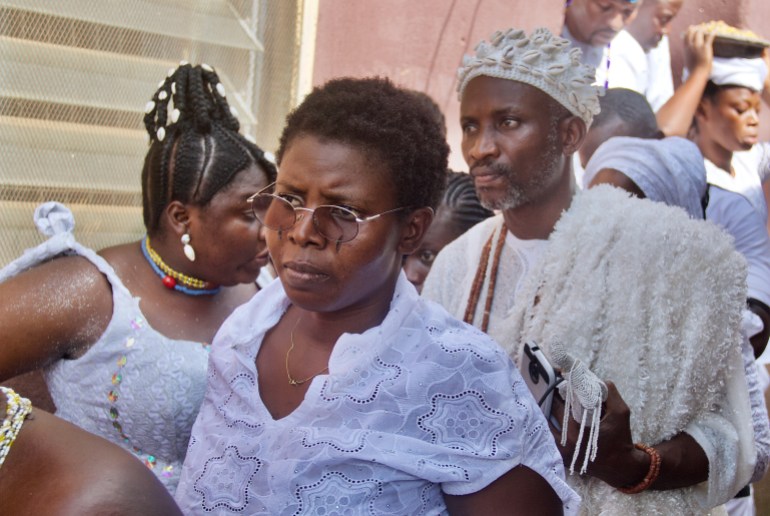 “I am glad that I am part of this year’s festival. I will continue to leave the beauty of this tradition to others,” says Foluke, culture enthusiast and radio host [Femi Amogunla/Al Jazeera]”Yoruba culture is the most beautiful legacy,” she says. “I personally appreciate the role that Yemoja plays in the Yoruba pantheon and in the mythical stories. At this year’s festival I feel connected, I feel fulfilled. I am so glad to learn more about Orisa worship, and I will continue to get people to see it, ”she says.

Women play an essential role in the worship of Yemoja, from preparing the offerings and carrying the calabashes to performing their duties as priestesses. 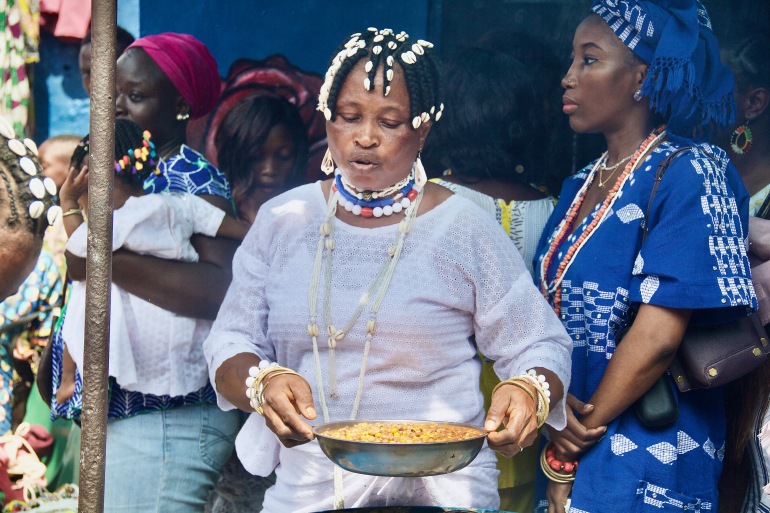 Efuleye, one of the calabash carriers, collects food to be taken from the fire to the river a few minutes before the procession begins [Femi Amogunla/Al Jazeera]This year Efunleye is part of the Arugba, a special group of women chosen by worshipers through prayer and consultation with Yemoja himself to carry the calabashes to the river. 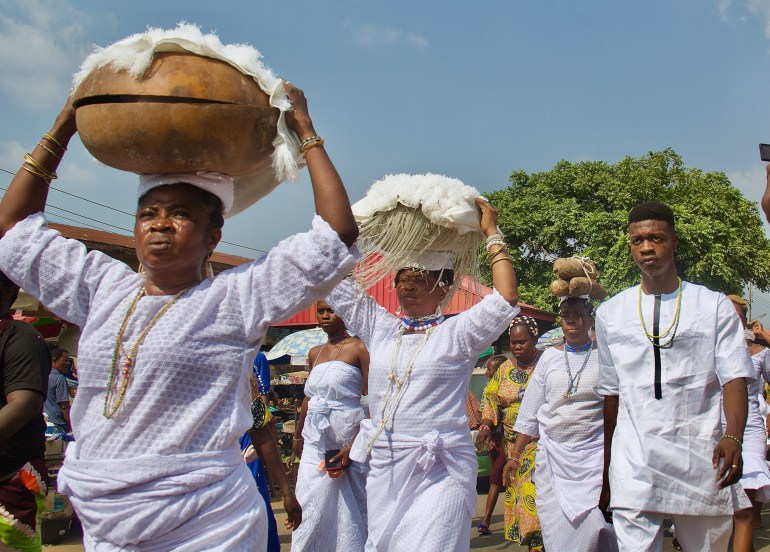 Efuleye Orisatara on the way to the river with the calabash that contains the food for the Orisha [Femi Amogunla/Al Jazeera]”All the women who carry the calabashes have certain roles assigned by Yemoja,” she explains.

“It says exactly what each person should wear. If you wear what you didn’t ask for, the person becomes unhappy. “ 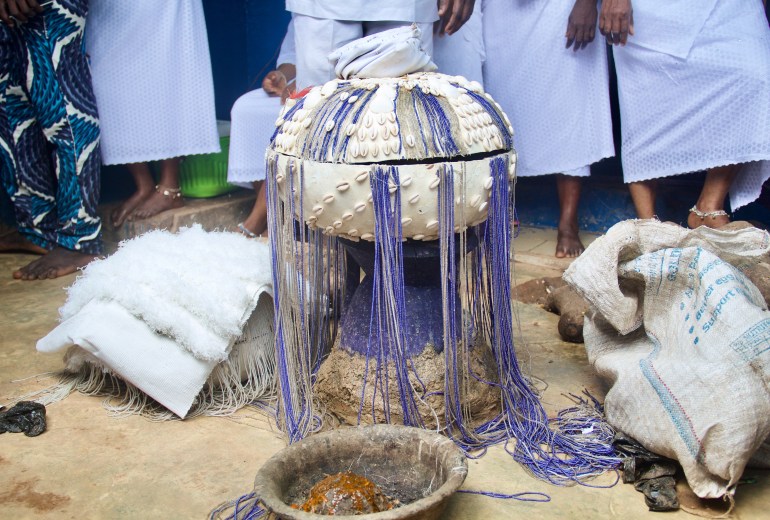 The calabashes with which the food of the deity was carried. Yemoja chooses who she wants to wear the calabash every new year [Femi Amogunla/Al Jazeera]The selection may differ in the following year. “By next year, Orisa could say,” I want a whole new group of people to support my celebration this year, or they can choose to keep them going. “ 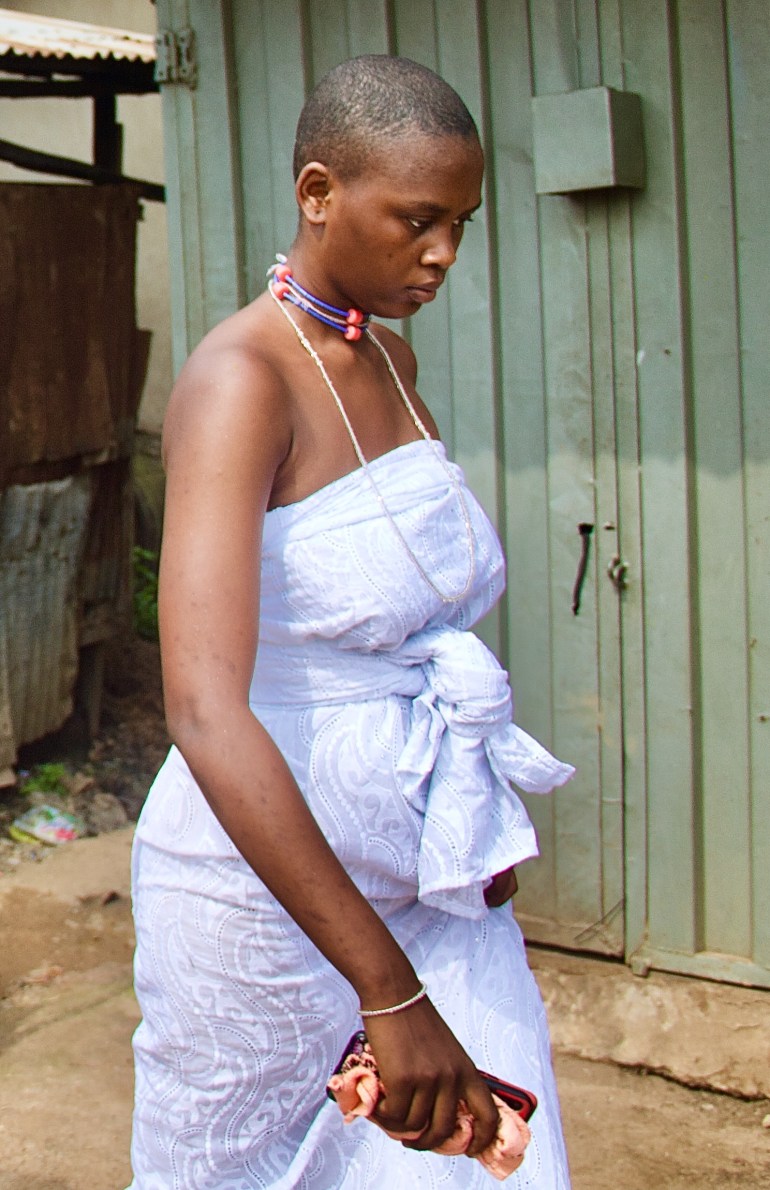 Johnson Omisegun, one of the new initiates, says she is “comfortable” with her newfound religion [Femi Amogunla/Al Jazeera]For the last day of the festival, the new initiates cut their hair short and wear special pearls. It is a very special event for Toluwani Johnson.

“I first met Yemoja through my mother after we moved from Lagos to Ibadan. After a few years, I decided to take things further by dedicating myself fully. That’s why this special festival is special for me. That’s what’s responsible for my haircut and those pearls that I wear, ”she explains.

She points to the three-layer, choker-like, blue-red pearl collection around her neck. “In a month I’ll be cutting off one of the shifts. Two months, the second goes and then the third. “At this point, Toluwani is entitled to wear the transparent, long, white pearls worn by Yemoja devotees.

Toluwani now has a new name – Omisegun, which means “water conquest” – and says that she considers Yemoja to be her personal Orisa. 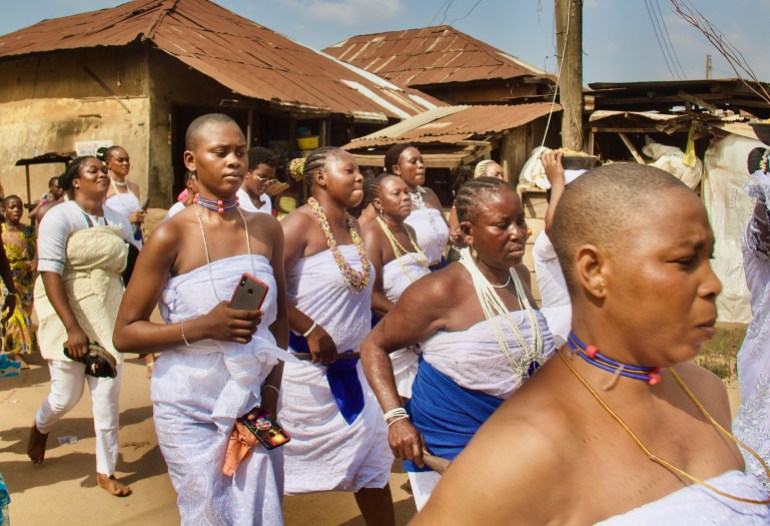 Jelili Atiku – “When the fish eats, the water is happy” 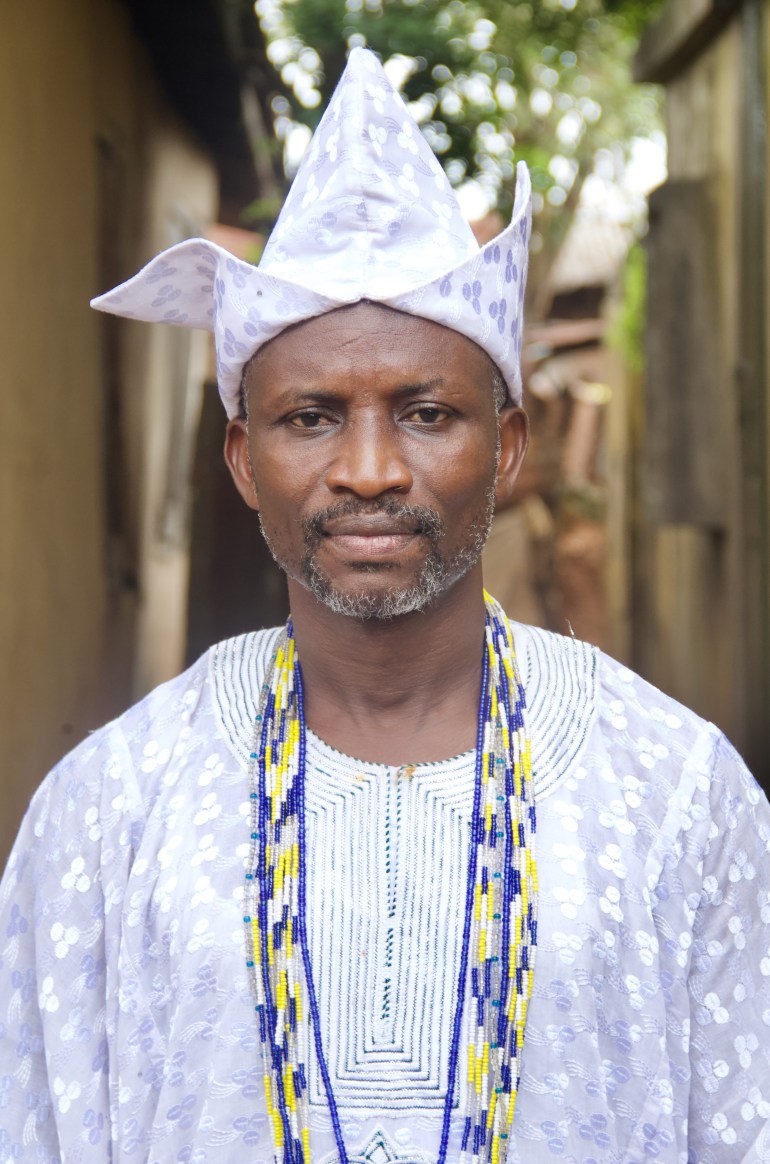 Atiku Jelili, a follower of Yemoja, says, “Civilization has made us lose some of our core values ​​and traditions.” [Femi Amogunla/Al Jazeera]The procession ends with the delivery of the contents of the calabashes to Yemoja on the river. One by one, the objects are opened and put into the river: a yam is cut into smaller pieces; a pigeon’s head is cut off and carried away by the water; The yam pulp is emptied into the river. 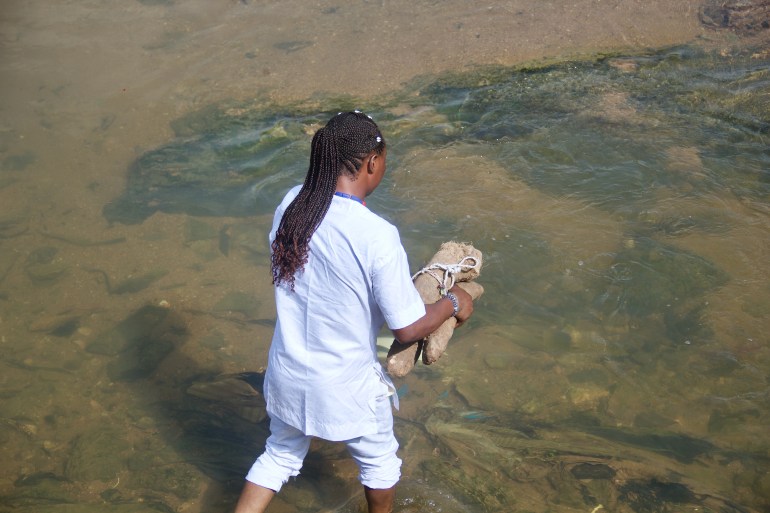 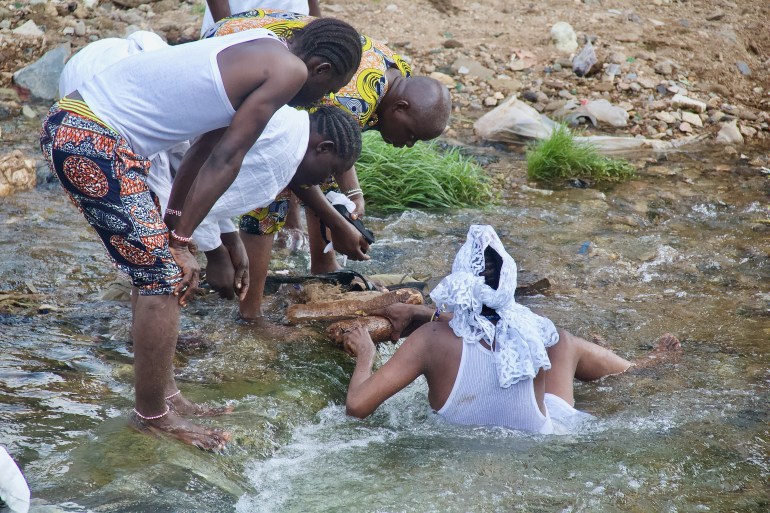 Baale Yemoja, along with other devotees, cut the new yam into considerable pieces before offering it to the deity [Femi Amogunla/Al Jazeera] 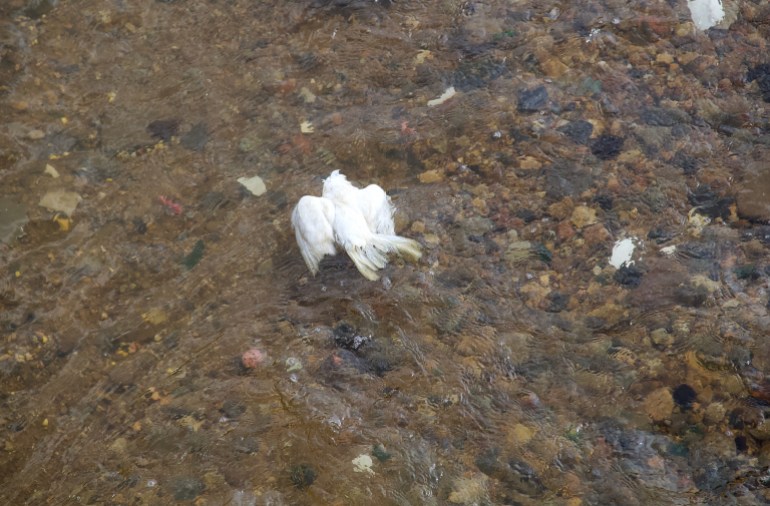 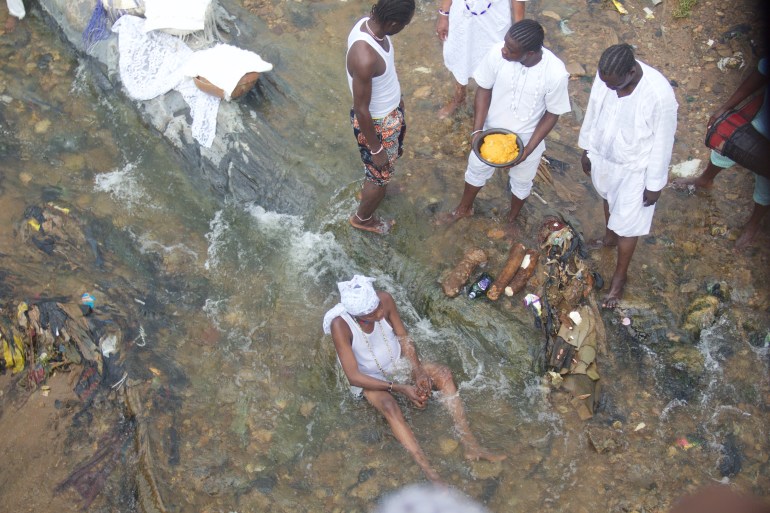 Baale Yemoja, along with other devotees, prepares to offer her porridge, one of Yemoja’s favorite delicacies [Femi Amogunla/Al Jazeera]”People have a lot of misunderstandings about what we’re bringing to Yemoja,” said Jelili, one of the riverside riverside supporters. “It’s basically things that fish eat: honey, soft corn, and other things. As soon as the fish start to eat, the water they live in begins to rejoice, as can be seen in its movement.

“The breeze from the river is cooling and whoever has something to ask of Yeye [another name for Yemoja] goes ahead to ask. If you don’t have responses to such requests by next year, please check yourself out and ask yourself why. “

Chief Egbelade Omikunmi, “Baale Yemoja” – or high priest of Orisa – is also the leader of all traditional Yoruba worshipers in Oyo state. After singing and dancing in the temple – before the devotees go to the river – he prays for everyone with his hands stretched forward.

After the procession to the river, Chief Egbelade is supported by other male devotees. He sits by the water and communicates with Yemoja. One by one, he drops the offerings from the calabashes into the river. As he does so, muttered prayers rise from the watching crowd, many hands pointing to the river. 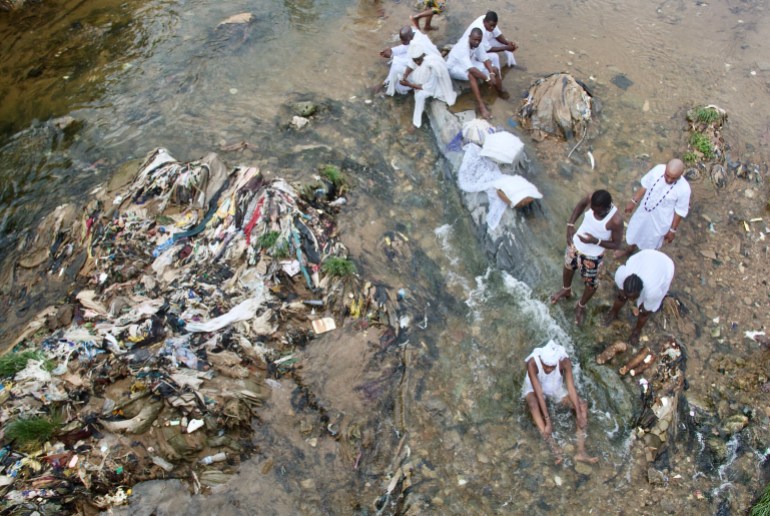 Baale Yemoja is waiting for one of Yemoja’s followers to bring the next offerings [Femi Amogunla/Al Jazeera]The festival processes have remained the same year after year, says Chief Egbelade.

“People come with different prayers. Last year, when someone came with a prayer and had their wish granted, next year they will come with more friends. Whenever prayers are answered, more people will come, ”he says. 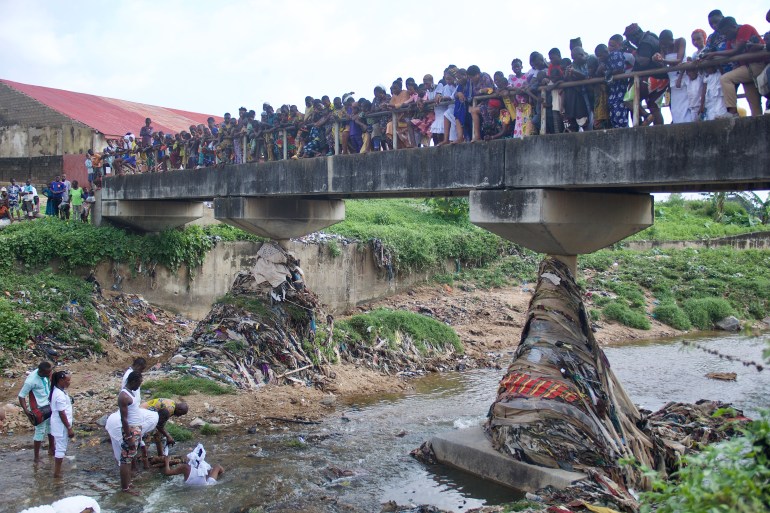 Some of the participants look into the water from the bridge as the reconciliation process continues [Femi Amogunla/Al Jazeera]Chef Egbelade says he is not afraid that the practice of worshiping Yemoja will die out.