Racquet sports such as tennis and racquetball seem to accelerate the degeneration of the knee joints in overweight people with osteoarthritis. This is evident from a study presented at the annual meeting of the Radiological Society of North America (RSNA).

Knee osteoarthritis, a gradual wear and tear of the protective cartilage that cushions the ends of the bones, is a leading cause of pain and disability worldwide, affecting approximately 14 million people in the United States alone. Obesity is a major risk factor.

Physical activity offers a variety of benefits for those who are overweight, but the wrong type of exercise can potentially damage the knee joints and speed up the need for knee replacement surgery. The effects of different types of exercise on obese people have rarely been studied using MRI, the most sensitive imaging method used to assess structural changes in the knee joint.

For the new study, researchers used high-performance MRI to determine the rate of degeneration of the knee joint in 415 overweight and / or obese patients, with an average age of 59 years, obtained from the Osteoarthritis Initiative, a National Institutes of Health-sponsored study of people come with mild to moderate osteoarthritis.

In patients who regularly participated in racket sports, the WORMS total score increased significantly compared to patients who regularly used the elliptical trainer during the study period. Surprisingly, the WORMS total score also increased significantly in the racket sports group compared to the jogging / running group. Racquet athletes saw significantly more degeneration in the medial tibial cartilage compartment, the compartment on the inside of the knee where arthritis often first appeared.

Participants who used the elliptical exercised showed the least changes in structural degeneration over four years. 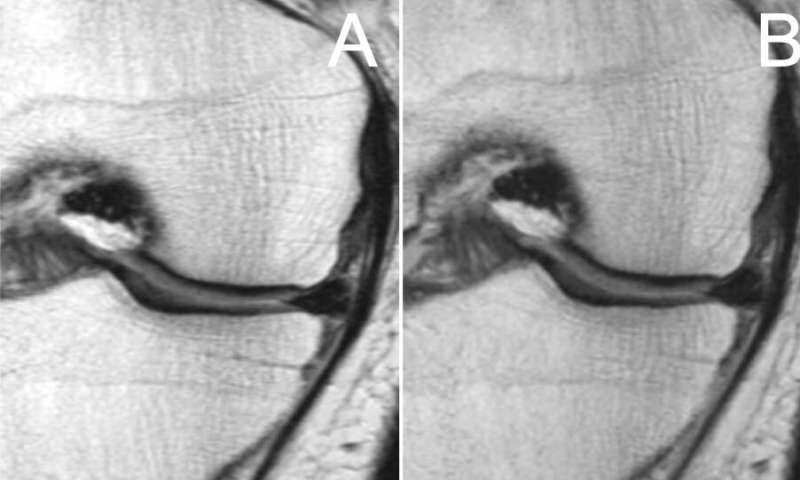 MR images of the right knee at baseline (A, C) and after 48 months (B, D). Overweight 76 year old male in the elliptical trainer group (AB) and obese 59 year old woman in the racquet sports group (CD). The woman developed severe cartilage damage to the femur and tibia bones (arrows) with associated damage to the meniscus (asterisk). In contrast, no cartilage damage was observed in the man in the elliptical trainer group (A, B). Photo credit: Radiological Society of North America

“In our study, progression of knee degeneration was consistently higher in overweight and / or obese patients who participate in racket sports,” said the study’s lead author, Dr. med. Silvia Schirò from the University of California in San Francisco and the University of Parma in Parma, Italy. “We also found that elliptical workouts were associated with decreased overall progression of knee joint and cartilage defects. In addition, our results showed that when comparing various low-impact activities such as cycling, elliptical, and swimming the elliptical was compared to the trainer lowest increase in WORMS subscores over 48 months. “

The faster degeneration of the knee joints in people who have participated in racket sports is likely due to the quick lateral movements inherent in such sports, said Dr. Schirò. These movements can include the femoral-tibia compartment, a structure in the knee made up of the femoral condyle, the rounded end of the thighbone that helps it slide over the tibia or shinbone, and the meniscus, which is rubbery, C-shaped Cartilage, affect between the thigh bone and the shin bone.

“A large side force exerted on the foot when moving from side to side can result in large adduction moments of the knee, a key characteristic of medial compartment disorders that place high pressure on the medial tibia and femoral condyle,” she said . “In support of this premise, the racquet sports group showed increased cartilage degeneration in the medial tibia.”

The researchers assume that joint mechanics are impaired in overweight and obese people and that harmful joint overload causes increased contact stress on the meniscus. Damage to the meniscus affects the protective cushion on the cartilage of the knee.

The data suggests that obese individuals who continue to play racket sports can slow down the degeneration of their knees by changing their activities, such as walking. B. switch to sports with less rapid and high shear loads such as badminton or double tennis.

Dr. Schirò emphasized, however, that the degenerative process is complex and the individual joint mechanisms are very different.

“It is possible that some people with sufficient strength and motor skills may be able to practice these sports safely,” she said. “Our data suggest that overweight and obese individuals who participate in racket sports are at higher risk as a group for the disease to progression.”

Weight loss through exercise alone does not protect the knees. Provided by the Radiological Society of North America

For the primary time within the pandemic, elements of Hong Kong are beneath lockdown

How tiny Timor-Leste stored the coronavirus at bay | Coronavirus pandemic...