In our series of letters from African journalists, Ismail Einashe looks at the importance of memory for those who lose everything in the chaos of war.

Christmas, New Year and Valentine’s Day are dates when many Somalis celebrate their birthdays. This isn’t as surprising as it sounds. It’s just that very few Somalis know exactly when they were born, and therefore opt for more memorable dates.

Somalia has an oral culture – most Somalis are more likely to be able to tell you the names of the last 20 generations of their ancestors than the details of their date of birth.

And Somali did not become a written language until 1972 when official records were kept – however, very few remains of these archives remain as the country was torn apart by civil war.

In fact, over the next year it will be three decades since the Somali state collapsed, leaving many families like mine with no important documents or photos.

We were forced to flee the escalating violence that began a few years earlier in 1988 with air and ground attacks by then-President Siad Barre’s regime.

Hargeisa, where I was born, became known as the “Dresden of Africa” ​​because the city was completely balanced in the conflict.

I spent my formative years in what was then the largest refugee camp in the world – Hartisheik in Ethiopia near the Somali border.

Like many of the many thousands who traversed the camp, which finally closed in 2004, I was deprived of all records of my pre-war life without a birth certificate or passport – purely because of short-lived and fleeting memories.

To pursue these, decades later I decided to return to Hartisheik to see what was left of the warehouse that was once my home.

I wanted to try to get a feel for where I had come from – to understand my status in this changing world.

“An endless surface of Mars”

On a hot afternoon I flew east of Ethiopia’s capital Addis Ababa to Dire Dawa, the country’s second largest city, although it felt more like a quaint, sleepy town with its lovely old train station that is only used as a home for a family of monkeys.

In front of the large entrance was an old carriage in which some men slept under the wheels while others protected from the sun, chewed khat, drank tea and smoked cigarettes.

After leaving the refugee camp, I lived briefly in Dire Dawa and visited my old places with interest before continuing east to Hartisheik.

I was more nervous about making this long trip in an old minibus. It was made worse by the regular military checkpoints and hours on a bumpy road from Jijiga city to the Somali border.

I remembered the camp outside of Hartisheik town as a dusty, remote, and unforgiving place – an endless expanse of a cracked Martian hue.

When people got there about 30 years ago, they found terrible conditions – there was no shelter, no water, no food and no medicine, and countless people died of hunger, thirst and disease.

However, as a child, I remember often having fun with my friends running around, playing with rocks and screaming in dizzying excitement on the occasional UN plane that flew overhead to provide much-needed assistance.

However, the dust that was anchored in my memory was nowhere to be found on my return – I was amazed to find a green, lush and beautiful landscape thanks to the rainy season.

No tombstones for the dead

It struck me as strange that such a tempting place, with its ponds, trees and long grass as far as the eye could see, had been so full of human fears all those years ago.

I was a little disappointed with my memories.

There was nothing to mark for the more than 600,000 refugees who once lived here at their peak – no gravestones for the dead and no official remembrance – the earth had taken everything back. 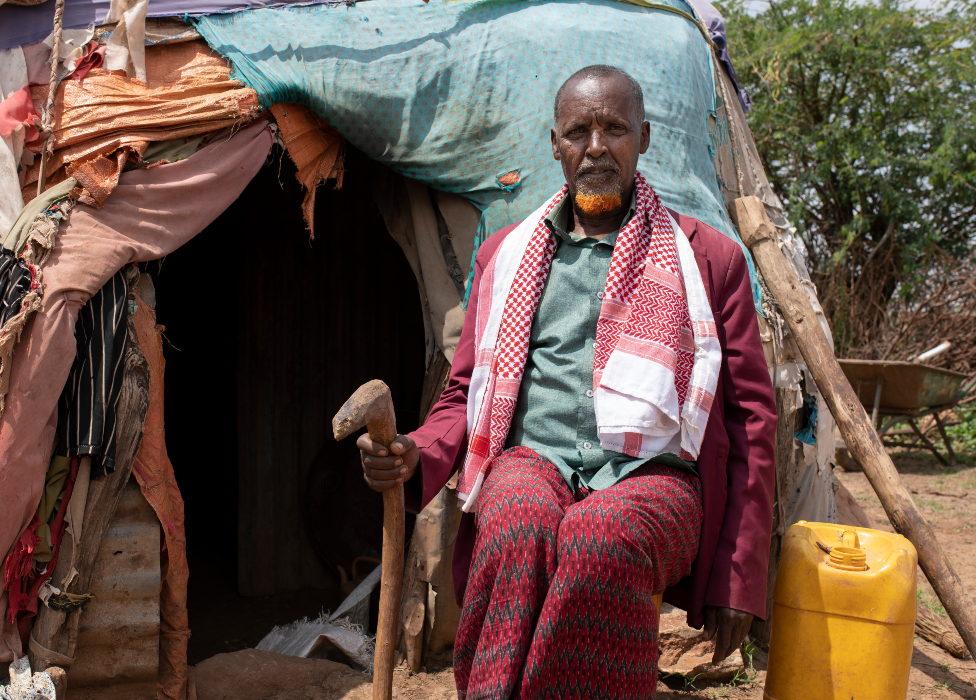 I discovered an elderly Ethiopian man, Mohamed, who had once worked as the camp’s caretaker – a place he remembered as full of war pain. “

Then I discovered an elderly Ethiopian man, Mohamed, who had once worked as the camp caretaker – a place he remembered as full of war pain.

He now lives with his family in a “bull”, a small traditional house, and they have cows, goats and farms as little as they can.

He told me that some warehouse buildings were still standing, including a hospital that a woman named Sahra had shown me around with her young granddaughter.

Painted in what appeared to be the UN colors blue and white, it reeked of decay and goat dung when it was occupied by animals from the Sahra family who had once lived in Wajale on the Somali side of the border but were now bred here.

I thought of all those who must have lost their loved ones in this building.

Of course, many of the younger people I met, like the young herdsman Jimale, did not remember the refugees at all.

Image rightsKate StanworthImage descriptionNomads are now wandering across the vast expanse of the camp, which was closed by the United Nations in 2004

I also met a group of Somali-speaking nomads who followed their camels in search of fresh grass and water and offered me, a tired traveler from London, fresh and spicy camel milk.

When the sky turned orange, I decided to return to Hartisheik town before sunset – to leave the camp a second time, this time as a man, but a changed man, slightly dazed and confused by the tricks of memory.

It reminded me of another memory – I was about five years old and found a small tub of discarded Vicks ointment in the camp – which I naively rubbed all over my face.

Inevitably it came to my eyes and a fountain of tears rolled down my face as I ran, dazed and confused, through the camp to look for my mother.

With Trump Fading, Ukraine’s President Seems to a Reset With the...